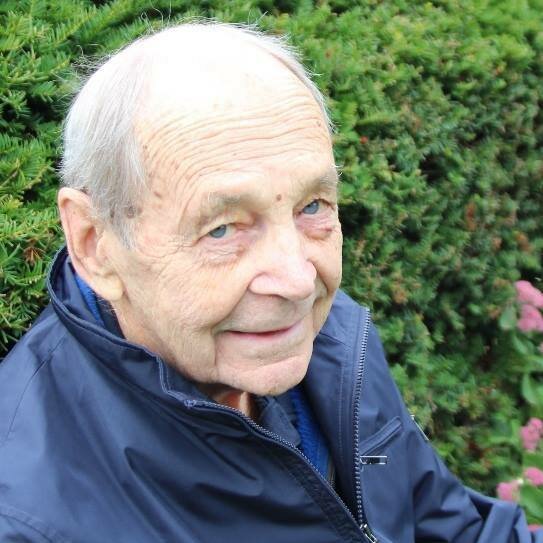 Gerald A. (Gerry) Mulligan was born on February 13, 1928, and died on June 27, 2022, at age 94. He was the loving husband of his predeceased wife Margaret (nee McDonald) and her sole caregiver for almost 20 years after she had a disabling stroke in 1995 at the age of 64. He was the much loved and respected father to Don (Sharon), Julie, Steve (Susan) and Paul (Carol), grandfather to Scott (Courtney), Sheree (Joel), Lisa, Robyn, Kelly, Dale and Kevin, and great-grandfather of Raiden, Jack, Eamon, Mark and Donovan.

At home and at work, Gerry was not one to waffle over a decision. One of his most famous sayings to his children was, "Keep your options open." At the heart of it, he was a family man and his unwavering commitment was an inspiration to all of us.

Gerry was an accomplished athlete, a star college hockey player, a winning curling skip, and a lifelong golfer, playing into his early 90s. He was also a dedicated amateur baseball and hockey coach, in college and for his children's many teams. One of his greatest enjoyments throughout his life was his vegetable garden. He loved to try new varieties and experiment with new techniques.

Gerry graduated with a BSc. (Agriculture) from the Macdonald College faculty of McGill University in 1952. He had a career of more than 60 years in the Canada Department of Agriculture in Ottawa as a Scientist, Research Director, and latterly as an Honorary Research Associate. He was the sole Canadian invited to present a paper at The Genetics of Colonizing Species, the first symposium organized by The International Union of Biological Sciences. This symposium is now credited with initiating the study of the genetics and evolution of invasive species. He has published many research papers, books, and has five active websites at http://weedscanada.ca/. He has determined and published the chromosome numbers for species of most plant families found in Canada and the United States and has named many new plant species from Alaska to California and from British Columbia to Quebec. He co-founded the Biology of Canadian Weeds series and edited the series for the Canadian Journal of Plant Science for many years. At age 93, he published his last scientific paper entitled Draba of Canada and Alaska in the June 2021 issue of the Harvard Papers in Botany.

He has been active in national and international associations and was a founding member of several, including the Canadian Botanical Association, the Genetics Society of Canada, the International Organization of Plant Biosystematics, and the Association of Systematic Collections. He served as President of the Canadian Botanical Society and was awarded its highest honour, the George Lawson Medal, in 2006. In 2014 he received the Macdonald College Distinguished Alumni Award.

His life story has been documented in a book, The Real Weed Man, Portrait of Canadian Botanist Gerald A. Mulligan (2014).

A Celebration of Life event will be held on Friday August 19 at 1:00pm at the Pinecrest Remembrance Centre, 2500 Baseline Road, Ottawa, Ontario. Masks mandatory.

For those who wish, donations can be made to Friends of the Farm

Share Your Memory of
Gerald
Upload Your Memory View All Memories
Be the first to upload a memory!
Share A Memory
Send Flowers