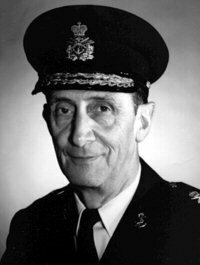 His family is saddened to announce the passing of John Alfred Gruber, Commodore RCN (ret.) OMM CD, on May 19, 2022. John was born on March 26, 1932 in Edmonton, Alberta, the son of Emma  (Casper) and Joseph Gruber.  He was predeceased by his parents and brother, Herman.

He will be greatly missed by his wife Maxine (Bayer) and his daughters Marta (Ken Brennan) and Heidi (Mark Lagacé) as well as his grandsons Gabriel and Dominic, of Ottawa, and brother Robert in Edmonton.

John was devoted to his family and never missed an opportunity to spend time with his daughters, whether fishing, biking, looking for tadpoles or exploring the wonders of the local dollar store. He made up such wonderful stories to tell his young daughters that we sorely regret not having a recording of them. After his daughters married, he helped them build decks and sheds and sprayed apple trees with dormant oil at just the right time and temperature. His physical strength was astonishing. His mental strength showed itself during his last several months in hospital. He accepted his long stay with good grace and humour. He was blessed by the care he received from the staff of Saint Vincent's Hospital. The family is forever grateful.

John was a career naval officer, with service dating from 1955 to his retirement in 1987.  His training was in aeronautics, but after several marine engineer training courses  in Canada and at Keyham in Britain, he served in a varied number of air and sea positions.  As a Commander, he was chosen for staff training at the Royal Naval College in Greenwich in 1967.  After his appointment as Captain (N) he served in NDHQ as Deputy Project Manager Canadian Coastal Patrol Frigate Project.  At retirement, he was Director General of Maritime Engineering and Maintenance.

There will be no funeral service at his request.  A celebration of life will be planned at a later date. John has been a long-time supporter of the Ottawa Mission and the HMCS Sackville Naval Memorial Trust in Halifax. Those wishing to do so would honour him by making a donation to either of these charities or one of your choice.

Share Your Memory of
John
Upload Your Memory View All Memories
Be the first to upload a memory!
Share A Memory
Send Flowers