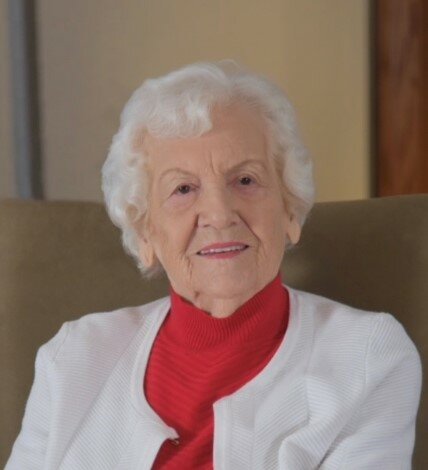 It is with deep sadness that we announce the passing of Ruth Elizabeth Noxon (nee Slaven) on April 29, 2022 at Riverpark Retirement Residence in Ottawa at the age of 100.   Ruth was the beloved wife of the late Rex Noxon (2009).

Ruth, daughter of Harry and Florence Slaven, was born and raised on the family farm near Bloomfield, Prince Edward County.  After marrying Rex in 1941, they moved to Windsor where they raised their family and lived happily for 62 years.  Ruth and Rex loved to entertain and had a great many friends.  The house was often full of guests with warmth and laughter in abundance. They were very popular members of the Windsor Sportsmen’s Club.

Ruth is survived by her sister Flora Reid. Ruth was predeceased by her brothers Bill, Harry and Joe and sisters Bernice and Joan and grandson Andrew.

We wish to convey special thanks to Dr. Amanda Connell for excellent care and to the staff at Riverpark Retirement Residence for the attention and care Ruth received over the years.

Online condolences can be made at www.colefuneralservices.com.

Share Your Memory of
Ruth
Upload Your Memory View All Memories
Be the first to upload a memory!
Share A Memory
Send Flowers