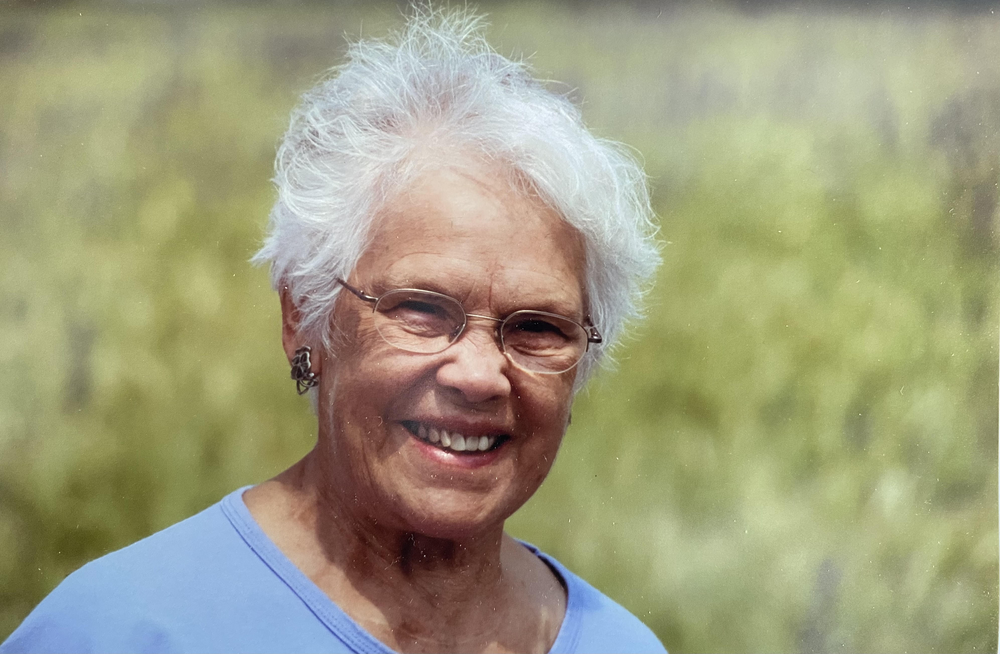 It is with great sadness that we announce the passing of our dear mother Hilda Keyte. She died in the company of her loved ones in the early morning March 6, as the beautiful winter light filtered into her room at Maycourt Hospice in Ottawa. She was just three days shy of her 93rd birthday.

Hilda was the last of her generation in her family, with her sisters Maude, Edna, Gloria and Olive and her husband, Freeman, having passed before her. Remembering her with deep love are her South African nieces and nephews Yvonne, Lee, Tracy, Heather, and Bruce, the dear family of her Uncle Elie and Aunty Ella, and in Australia her sister-in-law, Phyllis, niece Linda, nephew William, and their families. She will forever be loved and missed by her children Lawrence and Jennifer, her grandchildren Anna and Joshua, whom she loved so dearly, and her dear daughter-in-law Jade and her family.

Hilda led a truly remarkable life.  She was born in Potchefstoom, South Africa, on March 9, 1929.  One of five sisters, she grew up during the Great Depression in the diamond fields of the Northern Cape province near Barkly West, and later Johannesburg.  Some of her most cherished memories were in the former, where she lived a young girl with her Ouma, Oupa and dear uncles in their family home at “Louw’s Koppie”.  In her school years in Johannesburg, she excelled athletically in handball and track and field, and was a top student, “the best we’ve ever had” as her Principal wrote in a reference letter.  She was also known for her beautiful voice, singing for many years with her mother in the church and city choirs.  After the death of her father, Hilda had to leave her beloved school and sports teams at age 16, to find work to help support the family. She did this uncomplainingly, at times working two jobs morning until night to help her mother.

At age 19, Hilda found her ideal job with L.U. Partridge livestock auctioneers and dairy cattle specialists, where she impeccably handled the company’s bookkeeping while driving from auction to auction with her colleagues throughout the beautiful Transvaal countryside.  She remained with them for 10 years, and for the rest of her life retained a deep and blissful joy of being driven through the countryside and seeing the farmland pass by her window.

In an age when woman rarely travelled on their own, Hilda, age 24, set out for England and Northern Ireland, where she volunteered for a one-year mission for her Mormon church.  She was assigned to parts of England and Scotland for the year, and always spoke very fondly of her experience there.  Hilda returned to South Africa for a few years, then left again in 1958 for “one last trip”, this time to Canada, and planned to return to South Africa the following year.  Fate had other plans however, and in 1959 Hilda met Freeman, who hailed from Fiji, and they fell in love and married in December of that year in Calgary.

Hilda and Freeman moved down to Cambridge, Massachusetts, in 1962, and then Cape Cod, where Freeman was working on his PhD at MIT.  Their children Lawrence and Jennifer were born there, and Hilda often referred to their five years in Cambridge and Cape Cod as amoung the happiest years of her life.  In 1967 Hilda and Freeman travelled around the world for several months with the children, to visit their far-flung relatives in South Africa, Australia, New Zealand and Fiji.  They returned to Dartmouth, Nova Scotia until 1972, when they moved to Ottawa.  In 1975 Hilda and family moved into the home in Bells Corners where Hilda resided for 46 years until her last months in a retirement residence.  It is impossible to overstate Hilda’s love and appreciation for her home and the wonderful forest it backed onto.  “What a beautiful home we live in”, or “Aren’t we lucky to live here”, she would exclaim so often.

Hilda was an active volunteer, assisting with the Red Cross, with Scouts and Guides, and with school fundraising activities and her children’s sports, including diving into the role of Vice President of the Canadian Modern Pentathlon Association. She was deeply honoured to be chosen as Chef de Mission for the woman’s World Modern Pentathlon Championships in 1985. Hilda was well known in the neighbourhood for her annual door-to-door canvassing for several NGO’s, and for volunteering for over 20 years for the local Senior’s organization, the Friendship Club.

Hilda was a wonderful mother, grandmother and aunt, always there, always with a smile, an ear, a thoughtful perspective, endless encouragement, and her kind presence.  Her stories from the old country spoken in her lovely South African lilt, her quirky Afrikaans expressions, her laugh, her plates of cookies, her love of flowers, her endless expressions of gratitude, all will be missed.

Hilda beat all the odds by surviving two significant cardio-vascular events, and although those resulted in a slow decline in her health, she remained remarkably strong until her final year.  Her last conscious hours reflected how she lived, as she expressed her gratitude for everything that had been done for her, her love for those of us present and afar, and her deep thankfulness for all that is beautiful in the world. “Isn’t it a lovely day, with the sun shining outside and coming in the window like that”, she said with joy.

Hilda touched people’s lives in an indelible way wherever she went. To the person, those whom she met described her as one of the kindest souls they had ever had the joy to meet.  Friends of her children would visit her home repeatedly over the years, just to visit Hilda.  Unknown visitors would be invited in for a cup of tea, and leave smiling and feeling special.  Anyone leaving the house would look back to see Hilda standing at the door, in any weather, waiving goodbye until their car disappeared around the bend in the road.

We know those of you who knew and loved Hilda will carry her kindness with you always. She spread so much beauty in this world. She would be moved to know that in some small way, she may have inspired others to always find the good in people as she did, to welcome strangers, to pause and look out at the day and express gratitude, and to wave people down the road as they leave. “What a wonderful life”, she would so often say. Sleep in peace dear Hilda.

A Celebration of Life will be held at 10:00 a.m. on Saturday, March 19, 2022 at the Bells Corners United Church, 3955 Old Richmond Road, Ottawa. A Reception to follow.  “All are welcome.  Please RSVP to son Lawrence at lawrence.keyte@gmail.com if you plan to attend the Celebration of Life.”

Share Your Memory of
Hilda
Upload Your Memory View All Memories
Be the first to upload a memory!
Share A Memory
Send Flowers