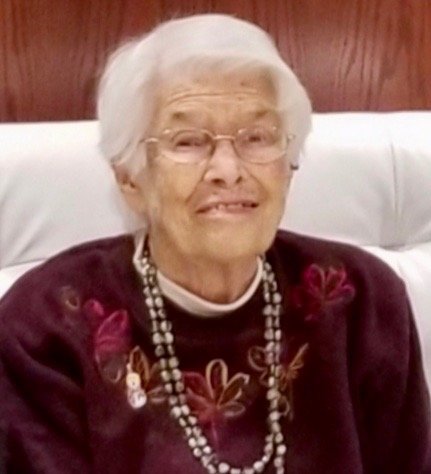 Jessie was born in Ottawa in the years following WWI to Arthur Gillingham Pedder and Ethel Maud Taylor, who died when she and her sister Audrey (deceased) were very young. She grew up in Dartmouth, Nova Scotia, Ottawa and then Kingston, Ontario. Jessie became a registered nurse, graduating at the top of her class at the Kingston General Hospital. She married geologist Edward Roderick Rose (deceased), moving from Sudbury to St. John’s, and then finally Ottawa. She is survived by her five children, David (Susan), George (Sarah), Barbara, John and Stephen (Janice), her half-sister, Lisa, several nieces and nephews, and many grand and great-grandchildren.

Jessie was a very kind soul who treated everyone with respect and gentle grace. The staff at Embassy West spoke very fondly of her, praising her gentleness, kindness and co-operation to the end.

Jessie was active in the Woodroffe United Church for many decades and sang in the choir there for many years. She enjoyed curling with a group associated with the Geological Survey of Canada and spending time with family and friends at the family cottage near Shawville, Quebec. Some of our fondest memories are warm summer days at the lake and evenings around the campfire. Large family Christmas dinners often led to funny neckties, “high” and “low” tables, games, songs, stories and much laughter. Jessie was also a champion at shuffleboard, which she enjoyed for many years at her winter residence in Florida.

A story she told about her wedding day tells much. After the ceremony, the minister offered some words of guidance, telling the newly-weds to “Fight the good fight”. Not as romantic as she expected but proving to be a solid guidepost for her life up to the very end. She surely fought the good fight, inspiring all who had the blessing of having her in their lives.

A family gathering will be held at some future time to celebrate her life.

Share Your Memory of
Jessie
Upload Your Memory View All Memories
Be the first to upload a memory!
Share A Memory
Send Flowers