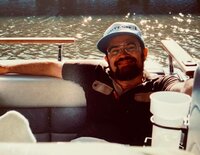 Lloyd Klein passed away peacefully on October 4th after a 15-year struggle with Parkinson’s Disease. His devoted daughters are comforted that he is finally at peace.

Born in Montreal November 20th, 1942, to Armin and Ilona Klein, Lloyd spent his younger years in Wingham, Ontario, until moving back to Montreal to attend high school. He later graduated from McGill University with a Bachelor of Science, with a focus on math, physics, and psychology. After that, he did graduate work in theoretical math and physics at Dalhousie University in Halifax.

In May of 1964 he met the love of his life, Suzanne Roy, in Montreal. The two were married on October 18th, 1970. Four years later they became the proud parents of daughter Lydia and in another three, they welcomed daughter Melanie. The family of four shared many beautiful memories in their home in Kanata (Ottawa), Ontario. Their bungalow was set on a large property boasting apple trees, strawberry & raspberry bushes, grapevines, and a massive vegetable garden.

When the girls were young, Lloyd and his father Armin built a large garage and tool shop in the backyard where he would enjoy fixing up several cars over the years. At any point, there were at least 4 functioning vehicles to choose from, a very convenient option during Canada's winter months. One notable vehicle was the Volkswagen Beetle, parked deep in the yard beyond the garden - he would joke that he was trying to grow a new one. Another was the Chevy van that came equipped with only two front seats. Before the days of seatbelt requirements, Lloyd famously built a backseat out of a sofa and accompanying Safety Bar, made of a steel pipe wrapped in foam and brown corduroy.

Lloyd enjoyed many hobbies including sailing his own sailboat, skiing, running and cycling, among others. He loved technology and was very fond of his many computers; he wrote code long before it was cool to do so. He loved building and repairing things; no task was too challenging for him to tackle in fixing up the homes of his friends and family.

Photography was a great passion for Lloyd, and his girls were taught from a young age how to pose and smile for a photo. His number one priority was his family and could always be found behind the lens of his camera at family gatherings.  He felt it was so important for everyone to know their history that he became the family’s curator of stories, photos, and family trees.

His career included many years at Bell Northern Research (BNR) where the kids enjoyed elaborate family picnics every summer. Before retiring, Lloyd worked for the Federal Government at the Atomic Energy Control Board and Ontario Hydro. When asked what he most enjoyed in his career, Lloyd said he loved to teach his fellow colleagues technology concepts via training seminars.

Lloyd, a lifelong educator, answered any question his daughters posed with accuracy and detail. Helping with things like science projects, home improvements and basic car repair, he and Suzanne taught their girls how to do many things for themselves. Most valued was the lesson that they were capable of so much just by being willing to try.

A devoted Zayde (grandfather), Lloyd adored the four grandchildren blessed to him by Lydia and husband Ryan, Kit (Kaitlyn), Riley, Maya, and Charley. They will cherish the time spent living with him under one roof. He was a wonderful playmate, attentive listener, and teacher for them. Some of their fondest family memories included Sunday morning waffles with Zayde. Lloyd is often remembered by family friends for his signature waffles.

In lieu of flowers, donations may be made to Parkinson’s Canada which was a great source of help to his family, providing specialized training to the Long Term Care staff that cared for Lloyd.