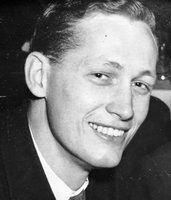 Garth Jackson passed away unexpectedly on April 26, 2021 at the age of 92 in his home in Ottawa. He lived independently and well in the family home to the end of his life. He is predeceased by his beloved wife and companion of 60 years, Irene Tilbury Jackson (nee O’Brien).  Garth is survived by his brother Dale Jackson of Calgary; children Valerie, Linda (Kevin Deierling), and Steven (Doxielyn Jackson); grandchildren Dustin (Julie Yeldon), Ben, and Sarah; great-grandchildren Nolan and Abigail; and extended family Charmaine, Juan, Tia and Everett Boyd and Luke Ootes.

Garth was born on a small farm near Magog, Quebec (father Leonard, mother Ruth - nee Clark) where he spent many summers. After high school in Magog he went to Stanstead College, then on to McGill University where he completed a Ph.D. in geology.  It was at McGill that he met Irene.

Garth’s professional work started with the Iron Ore Company of Canada. In 1960, he joined the Geological Survey of Canada with his first assignment to the Belcher Islands.  Shortly after, he began work on the geology of Baffin Island - a passion that, including post retirement, extended for over 50 years. He retained throughout his life a questioning and sharp mind and approached almost everything in a scientific and measured manner.

Garth took great joy in the successes of his children, grandchildren, and extended family.  He loved his  great grandchildren and was saddened at the distance that COVID19 introduced to the family.  He will be deeply and forever missed by all his family.

A Private Family Service will be held and a Celebration of Life will take place at a later date.