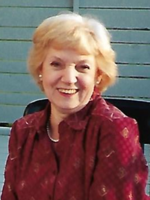 It is with deep sorrow and much love that we mourn the passing of Vera Ruby Witney (nee Matthews) of Nepean, Ontario on Monday, January 11, 2011, at the age of 97 years.

A strong, fiercely independent, intelligent, determined and caring woman whom we were blessed to have in our lives for so many years. Born in London, England, she led a long and adventurous life.

While serving as a Radar Wren in WW2 she met her husband to be, Buck. Buck used his savings to fly Vera from England to Moosejaw, SK (44 hour flight) where they were married in 1947. They then moved to Flin Flon, MB shortly after Keith was born (1949) where Buck became the Manager of radio station CFAR. After Buck’s election and appointment as a Cabinet Minister (1959), shortly after Ian was born (1958), they moved to Winnipeg, MB. Following Buck’s political career they moved to Toronto (1970), and later Ottawa (1975), where Buck was executive director of the Canadian School Trustees Association. Following Buck’s death in 1991, Vera bravely decided to travel on her own enjoying several cruises and trips to South Africa, Australia and China.

Vera was an avid gardener, a lover of puzzles (she even wrote and published her own Cross Word Puzzles), a keen Scrabble player and rarely missed an episode of Jeopardy.

Vera thoroughly enjoyed her grandchildren and always lit up when she had opportunities to interact with her great grandchildren. She will be dearly missed.

Per her request, there will be No Funeral Service. A Celebration of life will be held at a later date. In lieu of flowers, Memorial donations may be made to Ruddy Shenkman Hospice.

The family wishes to send a special thank you to the staff at the Ruddy Shenkman Hospice for their wonderful care and tender compassion.